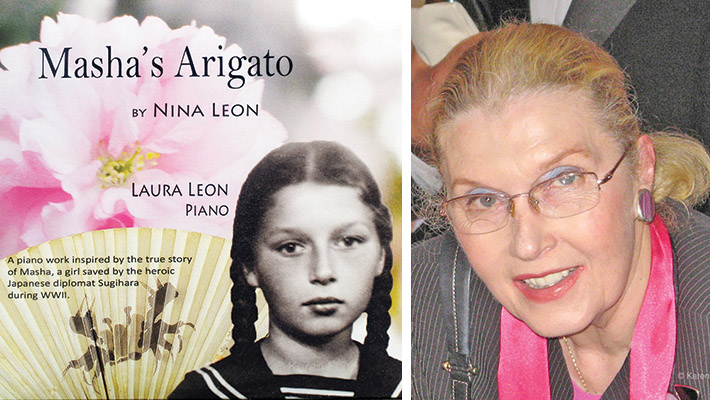 “During the Second World War, many Jews escaped from Europe on the Trans-Siberian Railway. They traveled to the United States via Japan holding life-saving transit visas which allowed them to pass through a third country (known as “Visas for Life”), the only means to travel abroad in wartime. The diplomat who wrote approximately 2,000 visas by hand, Chiune Sugihara(1900-1981), and his family, now live in New York.  They are still grateful to Japan. One recipient of the visa, Marsha Leon =Right side of the photo (Bernstein), a 10-year-old girl at the time of her escape, passed away five years ago at the age of 86.  Her memory lives on in her three daughters who grew up hearing their mother’s memories of kindness shown to her by the Japanese.Leon’s daughters are now thriving artists (a composer, a pianist, and a photographer). The three of them collaborated to make an album to express their gratitude towards Japan.  The album, entitled “Masha’s Arigato”=Left side of the photo, contains original songs and a rendition of “Sakura”, a traditional Japanese folk song.（Ryoichi Miura / Translated by Marie Smith)

“A visa for life made me a big fan of Japan”

“Our mother, Masha, arrived in Tsuruga in February 1941, and then she traveled to Kobe on February 24.  She was 10 years old at the time and was taken care of by a French nun at St. Mary’s Catholic Elementary School.  My mother and my grandmother, Zelda Bernstein, used Kobe as a base and visited Tokyo, Nara, Osaka, and Takarazuka during their six months in Japan.   I remember that they shared their fond memories of watching samurai movies and walking around Honmachi with us.  Her time in Japan was followed by her marriage in the United States, where she gave birth to three daughters.  She worked as a reporter for a Jewish newspaper while taking us to Kabuki and Bunraku performances.  In particular I remember the time when Toshiro Mifune came to the U.S. in 1992 at the invitation of the Japan Society.  There was a poster contest for the movie “Seven Samurai,” and I drew the poster and had him sign it. I gave him a copy. I was already a fan of Japanese movies, so my mother and I were very moved.

There were also folding fans and postcards that my mother brought from Japan, which were donated to the Tsuruga Museum in Japan two years ago.  Another memory I have is accompanying my mother when Prime Minister Abe visited the Jewish Museum in Washington D.C.  She was invited as a representative of the survivors and shook hands with him.

I heard that nearly 4,000 Jewish refugees once arrived in New York via Japan. I don’t know the exact number of survivors now, but my mother’s great voyage on the Amakusa Maru has led to our peaceful life today. We still have a subscription to TV Japan and enjoy watching sumo matches and other broadcasts.  My sisters and I were exposed to Japanese culture from a very young age.  My older sister, Laura, is a pianist, I (Karen) am a photographer and illustrator, and my younger sister, Nina, is a composer. Two years ago, the three of us collaborated on an album, which contains original compositions and “Sakura”.  It’s entitled  ‘Masha’s Arigato’ (Thank you from Masha)”.  Whenever I listen to it, I can feel the emotions of the distant Showa era surging through me.

Visa for Life Online Conference Links Japan and the U.S.A

On November 12, 2021, the “Japan-U.S. ‘Visa for Life’ Online Conference” was held to discuss Sugihara’s humanitarian efforts and their legacy. The event was centered around two books written by Akira Kitade. The first about the Japanese who supported Sugihara at the time, “Visa for Life, Faraway Journey” (published by Kotsu Shimbunsha), and “Harukanaru Tabiji (Continuing Life’s Journey)” (published by Parade), which focuses on the rescue of Jews by other diplomats. At the beginning of the conference, Ambassador Kanji Yamanouchi, Consul General of Japan in New York, delivered a message. In the latter half of the meeting, Laura Leon, a pianist living in New York City and daughter of the late Marsha Leon, read a statement and played music her sister, Nina, had created called “Masha’s Arigato”. In her statement of gratitude, Ms. Leon said that although it had been more than 80 years since Sugihara issued the visas, the descendants of Jewish refugees whose lives were saved by him and who made it to New York City are still grateful to Japan.

Shukan NY Seikatsu interviewed two of the three daughters of Marsha Leon, a survivor who passed away in 2017 at the age of 86: her eldest daughter Laura and Karen, who live in New York City.  For more information about the album: https://lauraleonpiano.com/cds/cds/c/241      musicaltapestriesinc.com 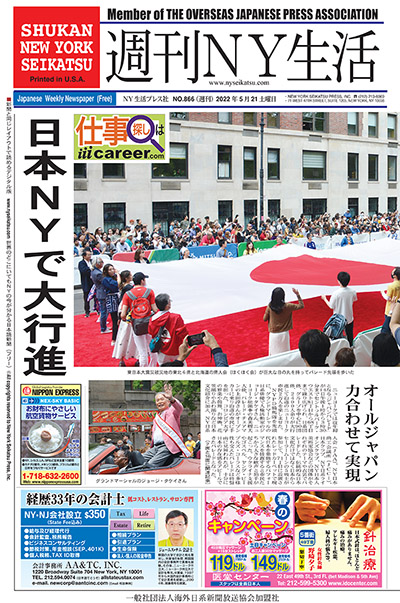